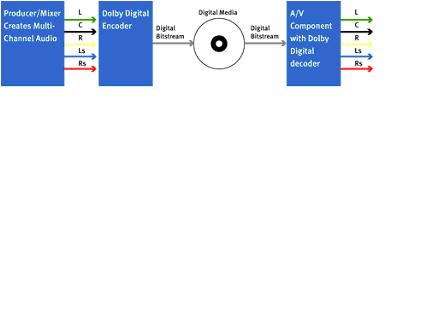 The superior coding efficiency of Dolby Digital-and its ability to deliver high-quality discrete multichannel audio without compromising video quality-has made it the designated audio standard for DVD worldwide
Dolby Digital is also the preferred multichannel audio standard for direct broadcast direct to home satellite and digital cable systems. Nearly 60 million digital cable and satellite set-top boxes are currently in use worldwide supported by over 30 million audio/video receivers equipped with 5.1-channel Dolby Digital decoding. Virtually every DVD-Video player sold today offers a two-channel mixdown of the Dolby Digital 5.1 movie soundtrack as well as a digital output for connection to a 5.1-channel audio/video receiver.
In the film industry, the Dolby Digital soundtrack is optically encoded right on the filmstrip, in the space between the sprocket holes. Placing the soundtrack directly on the film allows it to coexist with the analog track, a cost-effective and simple solution for film distributors and theatre owners. The sprocket hole area has also proven highly resistant to wear and tear, so that a soundtrack encoded in Dolby Digital will remain free of pops and hiss for the useful life of the print.
* The sound information contained in each of the six available channels is distinct and independent. These six channels are described as a "5.1-channel" system, because there are five full-bandwidth channels with 3 Hz to 20 kHz frequency range for Front Left and Right, Center, and Surround, plus one "Low Frequency Effects" (LFE) subwoofer channel devoted to frequencies from 3 to 120 Hz. 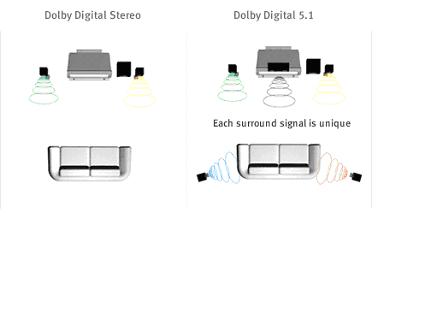 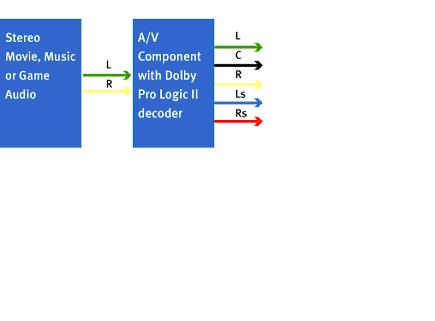 
Dolby Pro Logic II is fully compatible with all Dolby Pro Logic technologies. It provides optimal audio for playback in a 5.1-channel home theater system for the thousands of videocassettes and TV programs encoded in four-channel Dolby Surround (the encoding counterpart to Dolby Pro Logic's decoding technology. Dolby Pro Logic II also enables video game consoles to encode five-channel surround sound information into a stereo signal with virtually no impact on the console's CPU, which means all this extra audio won't slow your game down.

Dolby Pro Logic II can bring new life to your CD collection. Play your music through your home theater system, and you'll hear seamless, natural sound with new depth and detail � it's almost like hearing a newly remastered CD.

In addition to enhancing playback, Dolby Pro Logic II can be used to encode TV programming to deliver a surround sound experience for viewers with stereo TV systems. 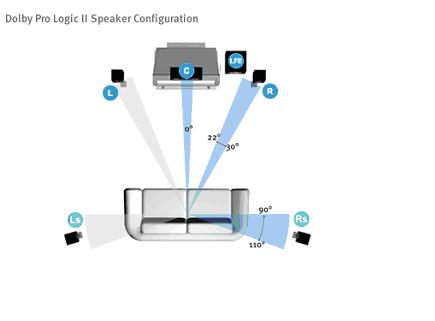 Feature films originally released in Dolby Digital Surround EX (the cinema version) carry the encoded extra surround channel in their subsequent DVD releases, as well as onto 5.1-channel digital satellite and TV broadcasts. If your home theater system has a receiver or preamp/processor with Dolby Digital EX decoding and speakers to support 6.1 or 7.1 playback, you can hear Surround EX soundtracks as they were meant to be heard, with the increased realism created by the extra surround channel. As in the cinema, with regular 5.1-channel Dolby Digital playback no sonic information is lost (although you'll miss out on the heightened realism).

Current Dolby Digital Surround EX soundtracks contain a digital flag that can automatically activate the EX decoding in a receiver or preamp/processor. For titles released prior to late 2001, however, you need to turn on the EX decoding manually. 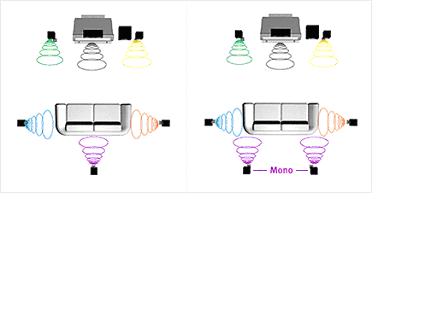 
Dolby® Pro Logic® IIx
The age of 7.1 surround sound for the home is here. But it's not just reserved for DVD movies encoded in Dolby Digital EX. With Dolby Pro Logic IIx, any movie, CD, TV program or video game can be enjoyed through this enhanced surround sound technology.

Pro Logic IIx is the first and only technology to expand any existing stereo- or 5.1-channel audio for a 6.1- or 7.1- channel playback, creating a seamless, natural surround soundfield that immerses you in the entertainment experience.

Three listening modes�Movie, Music or Game�allow you to tailor the audio to meet the different needs of the programming. In Game mode, for instance, special effects signals are routed to the surround channels for fuller, dramatic impact. Music mode features three additional user controls: 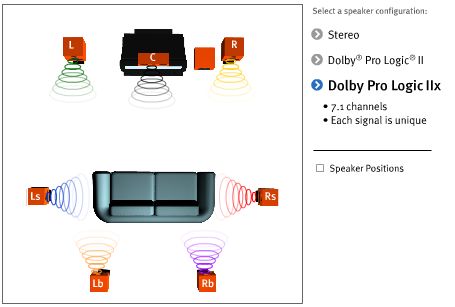 
Audio that completes the high-definition picture.
Dolby® Digital Plus is the next-generation audio technology for all high-definition programming and media. It combines the efficiency to meet future broadcast demands with the power and flexibility to realize the full audio potential of the upcoming high-definition experience. Built on Dolby Digital, the multichannel audio standard for DVD and HD broadcasts worldwide, Dolby Digital Plus was designed for the delivery formats of the future, but remains fully compatible with all current A/V receivers. With Dolby Digital Plus, you get even higher quality audio, more channels, and greater flexibility. Amaze your ears. 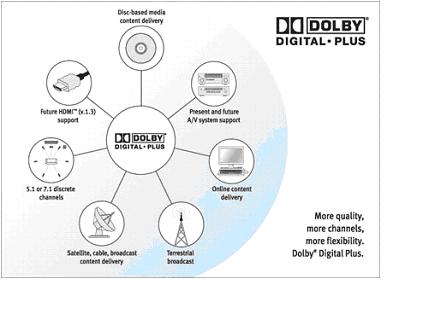 Features
• Multichannel sound with discrete channel output.
• Channel and program extensions can carry multichannel audio programs of up to 7.1 channels* and support multiple programs in a single encoded bitstream.
• Outputs a Dolby Digital bitstream for playback on existing Dolby Digital systems.
• Supports data rates as high as 6 Mbps.
• Bit rate performance of at least 3 Mbps on HD DVD and up to 1.7 Mbps on Blu-ray Disc.
• Accurately reproduces what the director and producer intended.
• Interactive mixing and streaming capability in advanced systems.
• Supported by HDMI™, the new single-cable digital connection for high-definition audio and video.
Benefits
• Can deliver 7.1 channels and beyond* of enhanced-quality audio at up to 6 Mbps.
• Allows multiple languages to be carried in a single bitstream.
• Offers audio professionals new creative power and freedom.
• Compatible with the millions of home entertainment systems equipped with Dolby Digital.
• No latency or loss of quality in the conversion process.
• Maintains high quality at more efficient broadcast bit rates (200 kbps for 5.1-channel audio).
• Selected by the Advanced Television Systems Committee (ATSC) as the standard for future broadcast applications; named as an option by the Digital Video Broadcasting (DVB) Project for satellite and cable TV.
• Selected as the mandatory audio format for HD DVD and as an optional audio format for the Blu-ray Disc.
Next-Generation High Definition Disc Players are Compatible with Current A/V Receivers
Whether you own an older audio/video (A/V) system equipped with Dolby® Digital, or a newer A/V receiver equipped with an HDMI™ connection or external line-level multichannel inputs, you are assured of a compatible, high-quality playback path.

Optimizing the Implementation of Dolby Digital Plus in SoC Designs
MIPS Technologies and Dolby Laboratories have collaborated to provide a rapid and low-risk methodology for deploying the latest Dolby Digital Plus technology to the set-top box and HD DVD/Blu-ray Disc™ markets.


Dolby® TrueHD is Dolby’s next-generation lossless technology developed for high-definition disc-based media. Dolby TrueHD delivers tantalizing sound that is bit-for-bit identical to the studio master, unlocking the true high-definition entertainment experience on next-generation discs. When coupled with high-definition video, Dolby TrueHD offers an unprecedented home theater experience that lets you enjoy sound as stunning as the high-definition picture.
Features
• 100 percent lossless coding technology.
• Up to 18 Mbps bit rate.
• Supports up to eight full-range channels of 24-bit/96 kHz audio.*
• Supported by High-Definition Media Interface (HDMI™), the new single-cable digital connection for audio and video.
• Supports extensive metadata including dialogue normalization and dynamic range control.
*Dolby TrueHD can support more than eight audio channels. HD DVD and Blu-ray Disc standards currently limit their maximum number of audio channels to eight.
Benefits
• Delivers enthralling studio-master-quality sound that unlocks the true high-definition entertainment experience on next-generation discs.
• Offers more discrete channels than ever before for impeccable surround sound.
• Compatible with the A/V receivers and home-theaters-in-a-box (HTIBs) of today and tomorrow.
• Dialogue normalization maintains the same volume level when you change to other Dolby Digital and Dolby TrueHD programming.
• Dynamic range control (Night mode) enables you to customize audio playback to reduce peak volume levels (no loud surprises) while experiencing all the details in the soundtrack, enabling late-night viewing of high-energy surround sound without disturbing others.
• Selected as the mandatory format for HD DVD and as an optional format for Blu-ray Disc.
Next-Generation High Definition Disc Players are Compatible with Current A/V Receivers
Whether you own an older audio/video (A/V) system equipped with Dolby® Digital, or a newer A/V receiver equipped with an HDMI™ connection or external line-level multichannel inputs, you are assured of a compatible, high-quality playback path.

This system has six channels: five full-range channels, and a low-frequency effects channel (the .1 of 5.1) usually expressed through a subwoofer. Many DVDs and digital broadcasts feature a Dolby� Digital (5.1) soundtrack, so this will give you optimum sound for most programming. It also most closely approximates the sound in most cinemas. 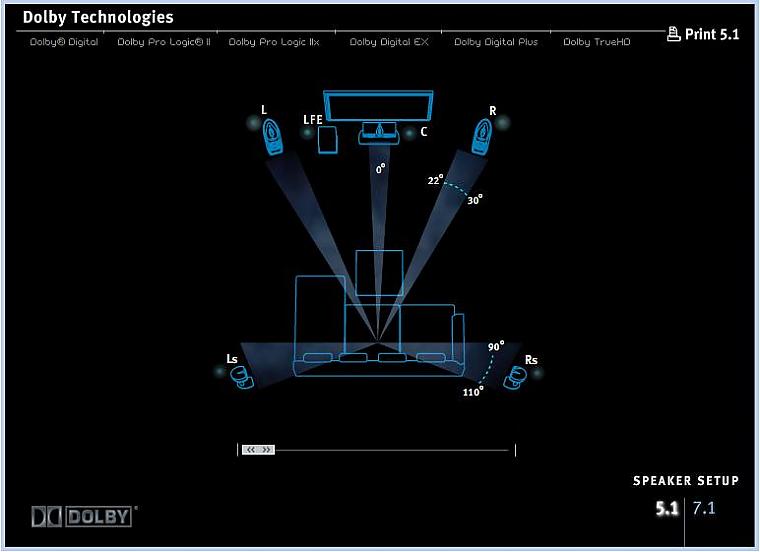 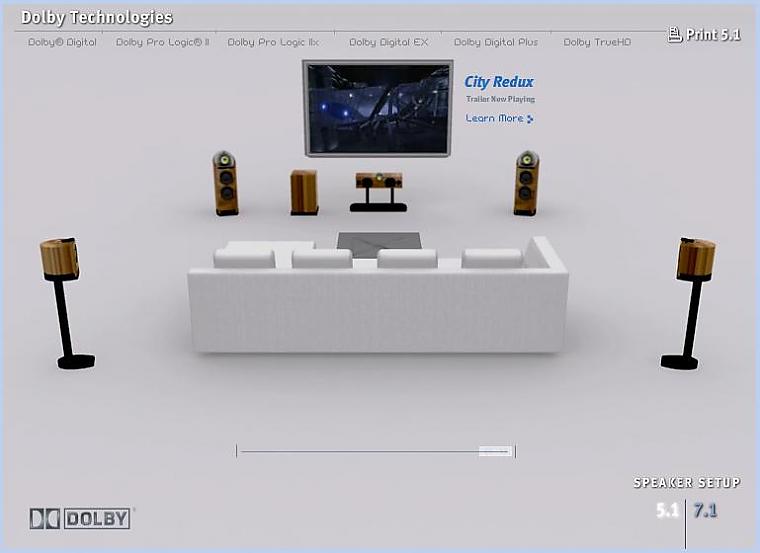 The most advanced home theater systems feature six (with Center Back) or seven (with Left Back/Right Back) full-range channels that allow viewers to take full advantage of Dolby Digital EX soundtracks and Dolby Pro Logic� IIx matrix-surround decoding technology. Both of these processes add surround information for greater realism and more dramatic effects. 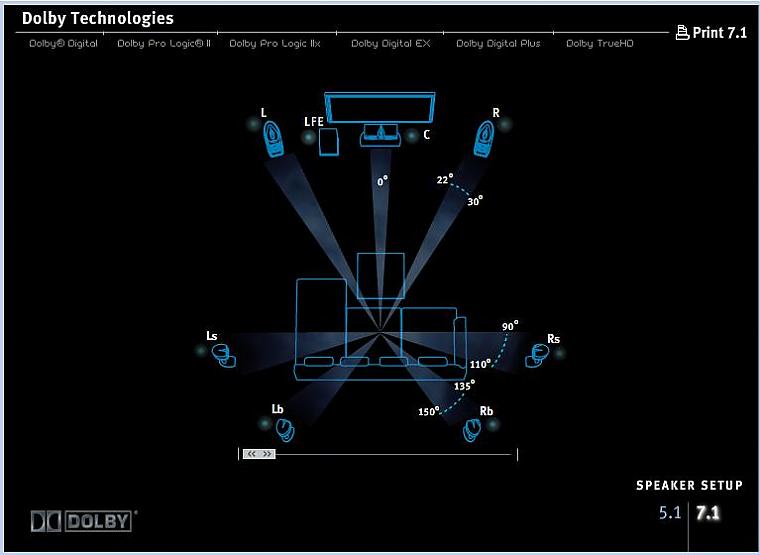 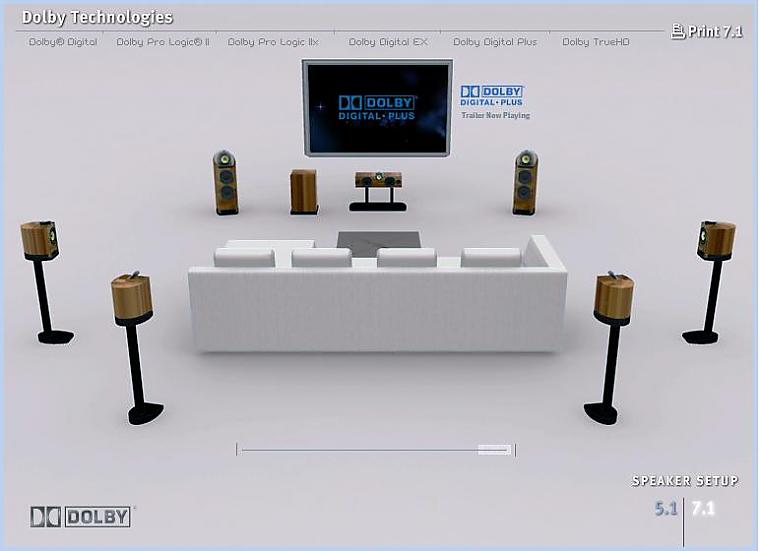 Of course, it's not always possible to place your speakers exactly as shown. The diagrams give a range of placement angles, so you have some flexibility. Sometimes you'll have no choice but to mount the surrounds behind you, but if you follow the guidelines as closely as you can, you'll have good sound.

Ideally, your front speakers, high-frequency drivers, or tweeters should be positioned at ear level (when you're seated). Our recommended height for the surrounds is above ear level, as soundtracks are likely to be optimized for that location.

Beyond keeping it on the floor, there's no specific rule for placing the subwoofer, as bass sound is non-directional. However, the amount of bass may vary depending on room location. You might want to try a few different places to determine what's best for you (sometimes moving the speaker even a few inches can change the sound).

Most speaker manufacturers offer complete home theater systems, usually based on a satellite/subwoofer configuration. You're assured of speakers that match sonically (and cosmetically). Generally, the satellite speakers in these systems are shielded, so they can be placed close to your TV set. If your stereo speakers are not shielded, don't place them too close to the TV. (They're too close if the picture starts to distort.)

If you're expanding a stereo system and want to keep the speakers you have, try to stick with the manufacturer of your current speakers when you choose your center channel, surrounds and subwoofer. Most speaker manufacturers can offer advice on complementary models.

The shape of your room and how it's furnished will affect the sound you hear. For instance, too many bare surfaces can cause reflections that may add harshness to the sound. Adding carpeting and drapes can help.

If you have a choice of rooms, avoid ones that are perfectly square or have one dimension exactly twice another. These rooms can aggravate resonances that color the sound.

If possible, center your seating area between the surround speakers.

The closer you place a speaker to intersecting room surfaces (corners, wall and ceiling, wall and floor), the stronger the bass output. This can help bass-shy speakers, but it can also add too much bass. Again, just moving a speaker a few inches can often make a big difference in sound.[/size]