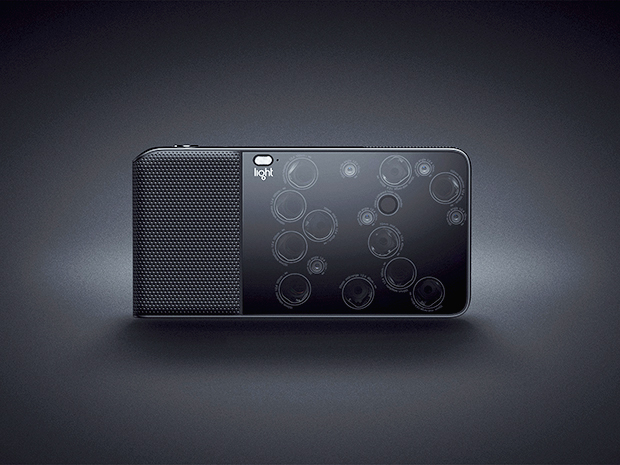 Last year, stealthy Palo Alto startup Light picked up $9.7 million in venture funding to “reimagine the art and science of photography.” Job postings indicated they were looking for people with experience in combining multiple recorded images to reduce noise and improve image quality.

This week, Light demonstrated a prototype of its first product, what it calls a “multi-aperture computational camera,” the L16, at the Code/Mobile conference in Half Moon Bay. This flat camera, which looks like a fat smartphone, includes 16 camera lenses with a variety of focal lengths, 10 of which fire at any one time. Behind each lens is a camera module that records an image in 13-megapixel resolution; exposure is set individually for each lens. Then the camera’s software selectively combines those images.

Like light-field camera Lytro, you can adjust the focus after shooting. Besides shooting still images of up to 52 megapixels, it shoots 4K video. It runs Android and can communicate with Wi-Fi so you can share an image to social media without transferring it to your computer.

And while you can put your money down now ($1300 until 6 November, $1700 afterwards), the product won’t ship for almost a year. Pricey, for sure, and clearly targeted at the early adopter who just has to have the latest cool technology. And though the name hints at a second generation to come (an L32, with double the number of lenses, say) this launch may be more of a clever public beta than a real mass market product. The company’s ultimate goal is to get its technology into smart phones; it has already signed an agreement with Foxconn. Light’s founders talk about the technology in the (admittedly promotional but still interesting) video below.