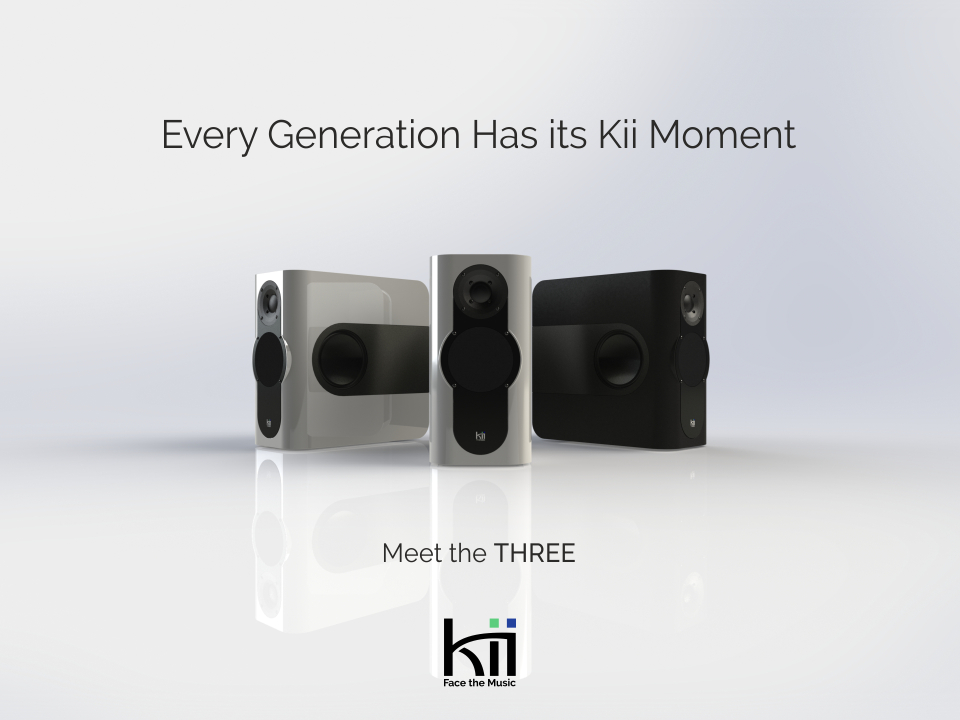 Combine Bruno Putzeys, Bart van der Laan, Wim Weijers, Chris Reichhardt and Thomas Jansen and arrive at new company Kii Audio. Their first project is the kii three active loudspeaker. "We offer linear frequency response, a perfect impulse response plus phase coherence and pack 1'500 watts per speaker divided across six drivers into a compact and lightweight enclosure. Bruno Putzeys invented the Active Wave Focusing™ technology to control dispersion and direct the sound pressure where we need it to be: in the sweet spot! Intelligent DSP processing provides the kii three with a cardioid dispersion pattern down to the low-mid and bass frequencies, which otherwise can only be achieved by very wide baffles, big cabinets or soffit mounting speakers (infinite baffle design). The controlled sound dispersion is the only reason why a big main monitor system in a good room offers the special feel and impact it does."

The Secret of Big Speakers

Kii’s mission for the THREE was to break the sonic mould of compact speakers. Powerful small speakers with deep bass have been around for a while now but none so far sounded like a big speaker. The THREE is built to fix that.

Basic acoustics tells us that a classic box speaker only directs sound towards the listeners from the midrange up while bass frequencies are radiated all around. The frequency where this change happens depends on the size of the box front (the “baffle”). The smaller the baffle, the higher the frequency at which bass is still radiated all around instead of directed towards the listener.

That in short is why big speakers have so far delivered much more precise timing and detail in the bass and low mids than small speakers: the room gets less chance to interfere. And that is what Kii has now managed to make a compact speaker do.

Category Killer
The THREE is the first compact speaker that can better the clarity of a full size sound system in a large room while its small size means it’s equally at home in much more modest spaces. In fact, it is particularly small rooms that will benefit most from the THREE’s controlled bass. Better than big speakers at sounding big and better adapted for small rooms than other small speakers, THREE is a truly no-compromise product.

The Active Wave Focusing™ Solution
A loop hole in acoustics says that small directive speakers are possible - if you have enough drivers and you feed them the exact right signal. The THREE has a total of 6 ways, front, side and rear, working together to throw the sound in one direction only without relying on a baffle. The THREE’s ability to direct bass is comparable to, but much better controlled than that of a traditional speaker several meters wide.

With classical crossover filters, loudspeakers can only have a time aligned impulse response on the main axis. The animations on the left show the wave front as it’s built up by a typical modern three-way speaker with side-firing woofers. This example is crossed over at 250Hz, time aligned and phase equalised. Indeed the wave travelling towards the listener is coherent. Towards the sides and the rear the picture breaks down and the impulse is completely smeared. Also, low frequencies get emitted in all directions. In a real room (bottom animation) the sound that escapes toward the back will strike the wall behind the speaker and reflect towards the listener, who actually hears the speaker twice: once from the front and a bit later from the rear. Moving the speaker out into the room doesn't help. The overall bass balance looks better but the impulse response gets worse as the reflection now comes even later.

The animations on the right show how the Active Wave Focusing™ method retains full time alignment all around the speaker and how the presence of the rear wall has no impact. Sonically the effect is a very even, unusually detailed bass. Even in problematic rooms a drum kick has that visceral thud that previously only very big or in-wall speakers could achieve.

In case you are coming to High End Munich next week we would like to invite you to our launch party.

In case you are coming to High End Munich next week we would like to invite you to our launch party.